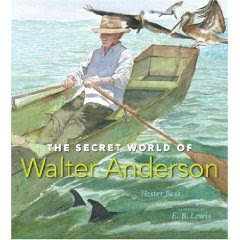 Sometimes books strike you in a particularly strong way and you might not know why. That’s true for me with The Secret Life of Walter Anderson. I’m so enamored of this book!Yes — the beach,nature, an artist, on an island — it makes sense that I would like a book with these elements. But this book is more — I want to know everything about Walter Anderson and his family, I want to visit the museum that holds his work, I want to see his work “in person”. I’m fascinated with his story. I embrace the idea that someone living so simply could be so happy.

The opening lines express the essense of the man —

But it’s not just about an artist who loved to paint but something more universal — its about following your heart.

The book focuses on his trips to Horn Island. Packing sparingly and leaving before dawn he’d row 12 miles out off the Mississippi coast and arrive on the island, greeting his animal friends. The uninhabited island had no electricity or buildings; food was scarce and the weather wild. Walter would spend weeks at a time on the island painting, writing and drawing. Though he was happiest here the work he created was kept locked in a cottage room and unseen until after his death. He was recognized for other works of art — paintings, sculpture, carvings — but what came from Horn Island was secret.

The illustrations are so atmospheric you can practically smell the salt air. Lewis’ loose, impressionistic watercolors pull you right into Walter’s solitariness and his intense focus on his subjects. The expressive well-crafted text portrays the character of the man and the natural world he was such a part of. Both art and text vividly capture his uniqueness.

An extensive author’s note sheds more light on Anderson — he was a troubled man and unable to live with his family. His brothers were also artists and founded Shearwater Pottery, though much of that legacy was destoyed by Hurricane Katrina. Horn Island is now protected as part of the Gulf Islands National Seashore.The author spent 7 years in Ocean Springs MS and her love for the area and admiration of Anderson are apparent. A bibliography is included. 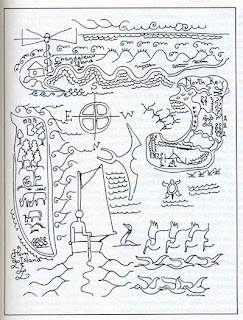 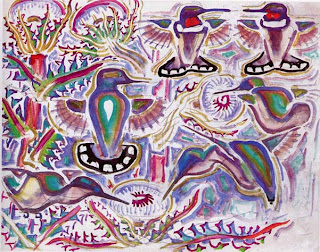 These images are taken from the Walter Anderson Museum of Art website.

Thanks to Candlewick Press for providing a review copy.