Guardians of Childhood, a new series by William Joyce, goes on sale today. Here’s my review of The Man in the Moon, which first appeared in the August issue of Parents Express (Montgomery News.)

The Man in the Moon, written and illustrated by William Joyce, Atheneum/Simon and Schuster, $17.99, hardcover, ages 4-8. 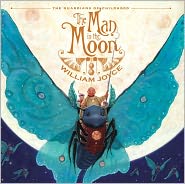 The September publication of The Man in the Moon marks the beginning of a grand event in bookmaking for it is the first book in the series The Guardians of Childhood. Joyce has spent the past 20 years working on the concept of Guardians, which will present the histories of such childhood icons as Santa Claus, the Tooth Fairy, the Sandman, and the Easter Bunny. The series will consist of 13 books—seven chapter books and six picture books – and an animated film due in Fall 2012. In this book we learn the story of the Man in the Moon (MiM,) a baby loved by his parents and watched over by his friend Nightlight, all who traveled the heavens in a ship named the Moon Clipper, designed to turn into the moon at night. His parents and Nightlight are lost in a battle with Pitch, the King of Nightmares (a character who figures prominently in the series’ story arc.) A stirring text and glorious, stunning art tells of MiM’s growing up and his discovery of Earth, its children and their dreams, and MiM’s plan to guard and protect them with help from friends – a toy maker, a regal rabbit, a fairy, a sleepy fellow who knew about dreams, and a lovely storyteller. This is the beginning of something special, a tribute to the caretakers we all know and believe in. For more information visit the website.