I turned 52 this past weekend and I thought it might be fun to see what happened on page 52 in some of my favorite books (a WLCB version of bible-dipping.) Here’s what I found. Oh, and incidentally, if you are a middle grader, or a 52-year-old who feels like a middle grader, these are all FABULOUS summer reading picks. 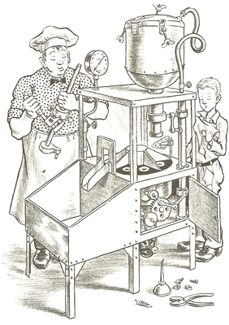 To my delight, on page 52 of my beautiful autographed, jacketed hardback of Homer Price (Robert McCloskey) I found a picture of the doughnut machine! (right) That story is BY FAR my favorite and the illustrations play a big part in why! I never met Mr. McCloskey but was able to buy my autographed copy at the (now-closed) Oz Bookstore in Southwest Harbor, Maine, from a terrific bookseller named Sheila Wilensky. Here’s a great bit from the story:

“Homer got down from the chair and pushed a button on the machine marked, “Start.” Rings of batter started dropping into the hot fat. After a ring of batter was cooked on one side an automatic gadget turned it over and the other wide would cook. then another automatic gadget gave the doughnut a little push and it rolled neatly down a little chute, all ready to eat.”

Well, that made me hungry, but moving on…had to open up From the Mixed-Up Files of Mrs. Basil E. Frankweiler (E.L. Konigsburg) to see what was on page 52. What a great scene – it’s where Claudia and Jamie see the angel statue for the first time:
“…now they reached what everyone was standing in line to see. A statue of an angel; her arms were folded, and she was looking holy. As Claudia passed by, she thought that that angel was the most beautiful, most graceful little statue she had ever seen; she wanted to stop and stare; she almost did, but the crowd wouldn’t let her.”

As with so many people my age, that book had a great influence on me. Helped me celebrate being the oldest sibling, liking to plan things, wanting something important to happen. I was so sad when Ms. Konigsburg died earlier this year. WLCB had another special connection with her (aside from my love of this book) – the year that Laurina was on the Newbury committee, the book chosen was The View from Saturday. 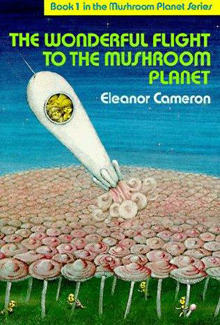 Moving right along, I found that on page 52 of The Wonderful Flight to the Mushroom Planet (Eleanor Cameron), the mysterious Mr. Bass tells Chuck and David why he wants two boys to build his spaceship instead of hiring an airplane company:
“Dear me! Oh, no, no, no!” he exclaimed. “A huge rocket ship, even could it have been built in time, and all the great lumbering men in space suites with oxygen tanks and cameras and radar instruments, would have frightened the poor Mushroom People out of their wits. Then too,” smiled Mr. Bass rather dryly, “what president of an airplane company would have believed me? You boys wasted no time in doubting. And, Chuck and David, you must never doubt anything I tell you. Remember that,” said little Mr. Bass, leaning forward earnestly, “you must never doubt.”

I think Mr. Bass and Mr. Willy Wonka would have been friends, because that little speech always reminded me of this one from Charlie and the Chocolate Factory (Roald Dahl), when Mr. Wonka is telling Charlie that he’s giving him the factory:
“Mind you, there are thousands of clever men who would give anything for this chance to come in and take over from me, but I don’t want that sort of person. I don’t want a grown-up person at all. A grownup won’t listen to me; he won’t learn. He will try to do things his own way and not mine. So I have to have a child. I want a good sensible loving child, one to whom I can tell all my most precious candy-making secrets – while I am still alive.”

Well, that speech wasn’t on page 52, but guess what is? It’s the page where Charlie finds the golden ticket! No kidding! I’m feeling better and better about turning 52:
“Charlie picked it up and tore off the wrapper…and suddenly…from underneath the wrapper…there came a brilliant flash of gold. Charlie’s heart stood still.” 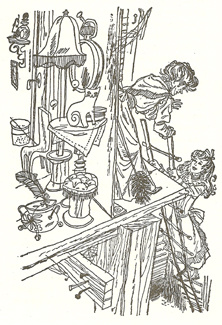 On page 52 of The Borrowers Afloat (Mary Norton) I found a picture (right) by the tremendous Beth and Joe Krush, who illustrated so many of my favorite middle grade books: The Borrowers Series, Miracles on Maple Hill, Gone-Away Lake. They just had a light and wonderful touch and their illustrations enhanced the books in so many ways. I was lucky enough to meet them once, at the Children’s Book World in Haverford, PA – they were gracious and lovely and seemed bemused but pleased that I treated them like royalty.

And here’s what I found on page 52 of Gone-Away Lake, my all-time favorite middle grade book and the BEST summer book EVER. Portia and her cousin Julian have just met the elderly brother and sister Mrs. Cheever and Mr. Payton and are discussing the fortune that the siblings might have made from bottling and selling their special mosquito repellent. Mrs. Cheever says: “No thank you, I said. I like my swamp. I like my life; what Pindar calls my ‘hermitude.’”
“And she was quite right,” said Mr. Payton. “Our life suits us; we want no change. Except that it would be a pleasure to have callers like yourselves drop in oftener.”

I was going to look at some more page 52’s, but now that I’ve picked up Gone-Away Lake, I can’t put it down…looks like summer’s off to a great start…