I found out recently that the links to our reviews published in Parents Express can be problematic so I’ve decided to post the reviews here once they’re live online. The paper editions are available locally (in the Philadelphia and southern NJ areas.) The following reviews appear in the May issue. 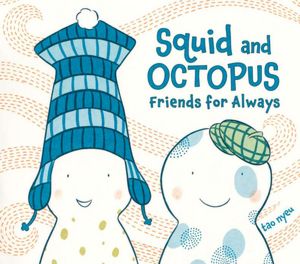 One volume in an outstanding nature series for young children, this title introduces the ocean, describing animals and plants that live there and it’s importance to our planet. Simple language in large type against a white background, “Most ocean animals live near the top of the water where there is plenty of sunlight” is paired with full page realistic art (in this case, flying fish in and above the rolling waves) on the facing page with a caption.  An Afterword provides additional information for each illustration plate. Simple and stunning. 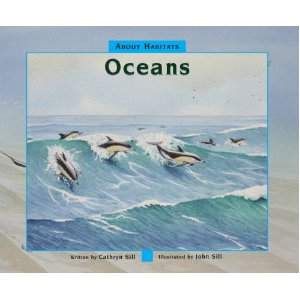 Ocean lovers of all ages will hug this picture book close while walking down to the shoreline, agreeing that the author and artist have captured the ocean’s essence. The poems, relatively short, salute the water’s majesty and quietude, its inhabitants, and the surrounding landscape. Beginning with a sailboat leaving the harbor, “For the water sings blue and the sky does, too,/and the sea lets you fly like a gull,” and ending with the shoreline, “Ocean draws on the sand/with trinkets of sand and stone, the way I write on the sidewalk/with a stick of chalk at home” some poems are humorous, some surprising and all use rich language. The watercolors and page layout bring more to each poem, the art expresses movement and life and a full range of exquisite color — sunlit ocean blue and subdued gray waters, jewel-colored fish and coral, shells of browns, oranges, pinks, and pearl white. A favorite double-page spread holds the poem “What the Waves Say” accompanied by 7 illustration panels of various types of waves. Ahhh! the ocean …

In the Sea, written by David Elliott and illustrated by Holly Meade, Candlewick Press, hardcover, $16.99, ages 4-9

This lovely picture book of brief poems about sea creatures is full of wonderful language and captivating woodblock illustrations covering double page spreads.  The poetry is accessible to young children and the words create playful images, for example in this one titled The Orca, “You breach the water’s surface/in your black-and-white tuxedo,/then disappear into the blue,/an elegant torpedo.” The woodblock prints form bold black line art and applied watercolors add magnificent blues, greens, soft rose and purple, shades or orange and gold.  Add some poetry to your day at the shore. 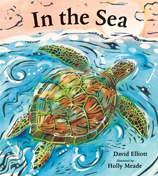 Life in the Ocean: The Story of Oceanographer Sylvia Earle, written and illustrated by Claire A. Novola, Farrar, Straus & Giroux, hardcover, $17.99, ages 5-9

Sylvia Earle calls the ocean “the blue heart of the planet” and this picture book biography tells the story of how she “lost her heart to the water.”  A world-renowned oceanographer, Earle began studying the ocean in her early teens and she’s never ceased wanting to know more. She’s been on numerous dives and expeditions and has lived underwater for two weeks. Nivola relates Earle’s story using much of Earle’s own delightful and descriptive language. There are shades of blue on almost every page, in contrast with riotous colors of coral and fish, the darkness of ocean depths and lovely luminescence. 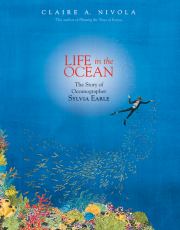 The Big Green Book of the Big Blue Sea, written by Helaine Becker and illustrated by Willow Dawson, Kids Can Press, hardcover, $15.95, ages 8-12

This information and activity book about the ocean focuses on marine ecology and pollution with a very assessable and hands-on approach and can be read cover-to-cover or browsed.  Sidebars titled “What’s Going On?” are linked to the activity and extend it, and sidebars “What’s Happening Now?” and “The Ocean at Risk” will elicit discussion.  An appealing design with a jaunty display font and photos and digital art make this a book a title that will be picked up for enjoyment and information. 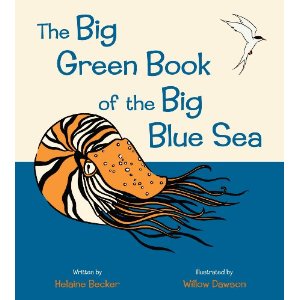